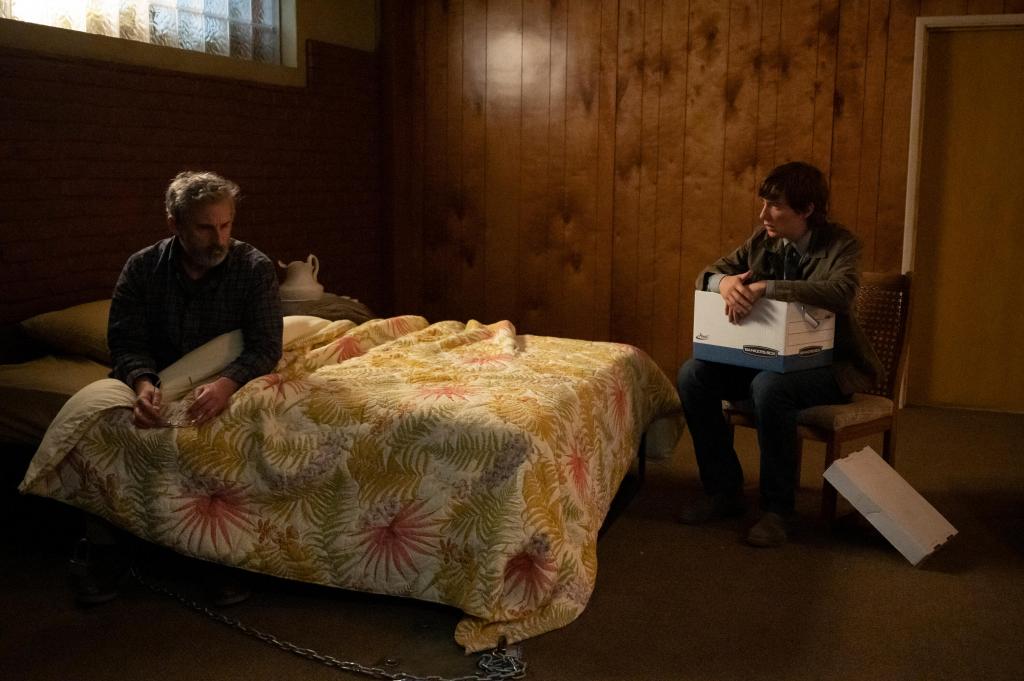 SPOILER ALERT: This story contains details from the final episode of FX’s The Patient on Hulu.

The Patient — a grim limited series about psychotherapist Alan Strauss (Steve Carell) who attempts to treat serial killer Sam Fortner (Domhnall Glesson) — has ended its run on Hulu. Here, creators Joe Weisberg and Joel Fields (The Americans) talk about what inspired their story and why it was important to end the tale the way they did.

DEADLINE: There’s a moment in the second to last episode where Sam looks at a video on YouTube of a serial killer. I’m wondering if something like that happened with you guys, which spawned this idea to begin with. Did it start with something like that?

DEADLINE: So that video is of an actual serial killer?

JOEL FIELDS: That is a real guy who did turn himself in. He did all those things. That’s a real interview with him. And yeah, part of what drove himself to turn himself in, according to him anyway, is that he really wanted to understand why he kept doing this. He wanted to stop. That was part of what started to ring our creative bell early on.

WEISBERG: By the way, Mindhunter fictionalized that guy. He was in that show too, but a fictional version of him. We’ve returned him back to nonfiction.

DEADLINE: So when you first were putting this on paper, did you know that Steve Carell’s character had to die at the end?

WEISBERG: There should be a simple answer to that, but there really isn’t. I think that was our initial instinct. Then there were many iterations of the ending that we talked about, that we wrote, that we experimented with, that we acted out for each other. This was the one that just felt the most true, the most authentic and meaningful to us.

DEADLINE: Can you talk about Steve’s journey? You really see him break down.

FIELDS: Oh boy. We put that guy through the wringer. I mean, he put himself through the wringer. He almost never worked anywhere except in the basement, in that small set. He had a very small area that he could actually walk around. He was chained the whole time and with a real heavy chain, you know? And the stuff he was doing dramatically was so intense and so painful.

WEISBERG: And as you can see, he did not phone it in. He was not a complainer, either. He just does a ton of preparation work and a ton of talking. He would do the work and then he would go home. I do remember there had been a really intense day… I think it might have been when Elias (Alex Rich) was killed. The next day we met up to read through one of the episodes and he came in and said, “Man, that was an intense day yesterday. It was really tough. I even had a hard time sleeping.” And Domhnall walks up behind him and goes, “I slept like a baby.” It was very intense work, but they also found ways to have fun.

DEADLINE: The series gets intensely violent, bloody and dark. We’ve all been in closed environments during the pandemic. Were you worried whether this was right subject matter for the time? I mean, the situation got so heavy that Alan was dreaming about being in a concentration camp.

WEISBERG: We actually felt it was the right subject matter. I think on some level, the whole thing grew out of the pandemic. We were all kidnapped by something and held in our houses and unable to leave. I don’t think there was that much blood. You have us on the violence, but not too much blood. Neither of us is a fan of gore for gratuitous purposes or violence for gratuitous purposes, or even just to be uncomfortable or icky. But we also didn’t want to shy away from the reality of what Sam was doing. And as much as we wanted to understand, and even on some level empathize with this person who does terrible things, you don’t want to use that as an excuse to hide from the terribleness of what he does or the impact of what he does on others. The concentration camp is another part of that. For a Jewish character to be kidnapped and chained in a basement and threatened with his life and forced into labor digging what may well be his own grave? When we ask ourselves the question, “What would this character be thinking?” For us, those images came up pretty immediately.

DEADLINE: Did you also go back and forth about that final moment? Did you feel like you needed to give viewers a payoff, and have Sam be caught by the police?

WEISBERG: I don’t think we went back and forth on that.

FIELDS: We had a lot of discussions about what we owe, what we have set up for the audience so they can have reasonable expectations and what we are going to tell them. And clearly we owed another piece of Sam’s story, but it was very complicated. We tried a lot of things and almost everything felt artificial or tacked on until we got that. And that felt true, like a final piece for him and his mom Candace (Linda Emond).

DEADLINE: Alan was the perfect therapist. He always said the right things. Did you guys know inherently what a therapist should say from your many years of analysis? Or did you get some help on that?

FIELDS: We got some help. I don’t want to downplay, as you say, our years in analysis. We have enough years in analysis to probably spread out and help seven or eight people grow and develop. If you go through enough of that, you do get a feel for how it works and language. But there is nothing like an expert. And Dennis Palumbo was ours. He’s a therapist with many years of experience and was able to sort of reframe things and give us approaches to things from a therapist’s point of view that even as a patient with many years of therapy, would never quite come up. So that was incredibly helpful.

DEADLINE: I really felt sorry for Alan and his wife (Laura Niemi). Was his son Ezra (Andrew Leeds) rebelling by becoming an Orthodox Jew? Or was that just his desired path all along?

FIELDS: Things like that can have so many causes, so it can be the rebellion aspect or it can be anywhere in the middle. That’s why people are complicated and interesting.

WEISBERG: He was just so brilliant. He’s such a wonderful actor and a great person. And it turns out that his father was a psychotherapist, so he actually grew up very close to the subject matter. We can thank our casting director, Jeanie Bacharach, who suggested him for the part. And boy was she right.

DEADLINE: So as it got to the end, did you start to think that you didn’t want this to be a limited series?

FIELDS: I don’t think we had any desire for it to go on. It was a really great experience, but it was always intended as a one-season story. We were ready to say goodbye.

5 ways to avoid an apartment scam on Zillow and Craigslist

White Lotus: What Do the Head Statues Mean?

Bridget Moynahan’s Quotes About Her Relationship With Ex...