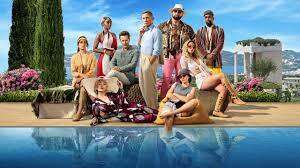 New On Netflix In December 2022: Glass Onion: A Knives Out Mystery, The Witcher: Blood Origin, Sebastian Maniscalco: Is


Hard to believe, but both November and 2022 are both drawing to a close. Netflix is bringing a lot of great marquee content to its streaming service to give everyone lots to look forward to after the rest of this month will be spent eating Thanksgiving leftovers and picking away at Black Friday shopping. Check out everything coming to Netflix in November below, plus some of our recommendations.

Easily, one of the biggest attractions coming to Netflix in December is Glass Onion: A Knives Out Mystery. Coming to the streaming service on December 23, the sequel has been faring well on Metacritic and Rotten Tomatoes–as of this writing, it’s got an aggregate score of 82 and 93, respectively, from the handful of critics who have seen it so far. (It’ll also be in theaters for one week only, starting November 23.) The film’s ensemble includes a returning Daniel Craig as master detective Benoit Blanc, joined by newcomers Edward Norton, Janelle Monáe, Kathryn Hahn, Leslie Odom Jr., Jessica Henwick, Madelyn Cline, Kate Hudson, and Dave Bautista. It looks truly nutty and like a great time–Norton plays a colorful tech billionaire named Miles Bron. Bron invites his friends for a getaway on his private Greek island–but when someone turns up dead, Craig’s Detective Benoit Blanc is put on the case.

On December 25, The Witcher: Blood Origin comes to Netflix. The prequel series was first teased in December 2021. Set thousands of years before the adventures of Geralt, Ciri, and Yennefer in the mainline Witcher show, the quick glimpse of Blood Origin we’re given showcases a trio of elves played by Michelle Yeoh as the sword-elf Scian, Sophia Brown as Éile, an “elite warrior blessed with the voice of a goddess” and Laurence O’Fuarain as the warrior Fjall.

Finally, on December 6, Sebastian Maniscalco is back with another stand-up special: Is It Me? The Chicago comic has famously been repeatedly championed by Jerry Seinfeld, which is no surprise, since both comedians regularly perform material that skews towards the observational and wrings hilarious insights out of the mundane. This time, Maniscalco heads to Las Vegas and “acts out life’s little agonies, from school drop-offs to off-leash dogs to date nights with his wife.”

Below is a list of all the content coming to Netflix in December. You can also check out our lists for Hulu, Disney+, and Peacock.

Sea of Thieves Season 8 kicks off on November 22

F1 Manager 2022 devs say that updates will continue after backlash

Gotham Knights Knighthood guide: How to unlock the glider

‘Vanderpump Rules’ Stars Who Left the Series: Where Are They Now?

EthereumPoW [ETHW]: How a forked chain is leading...

Once Human Is A Weird Survival Game You...

Uncharted: Legacy of Thieves Collection out for PC...