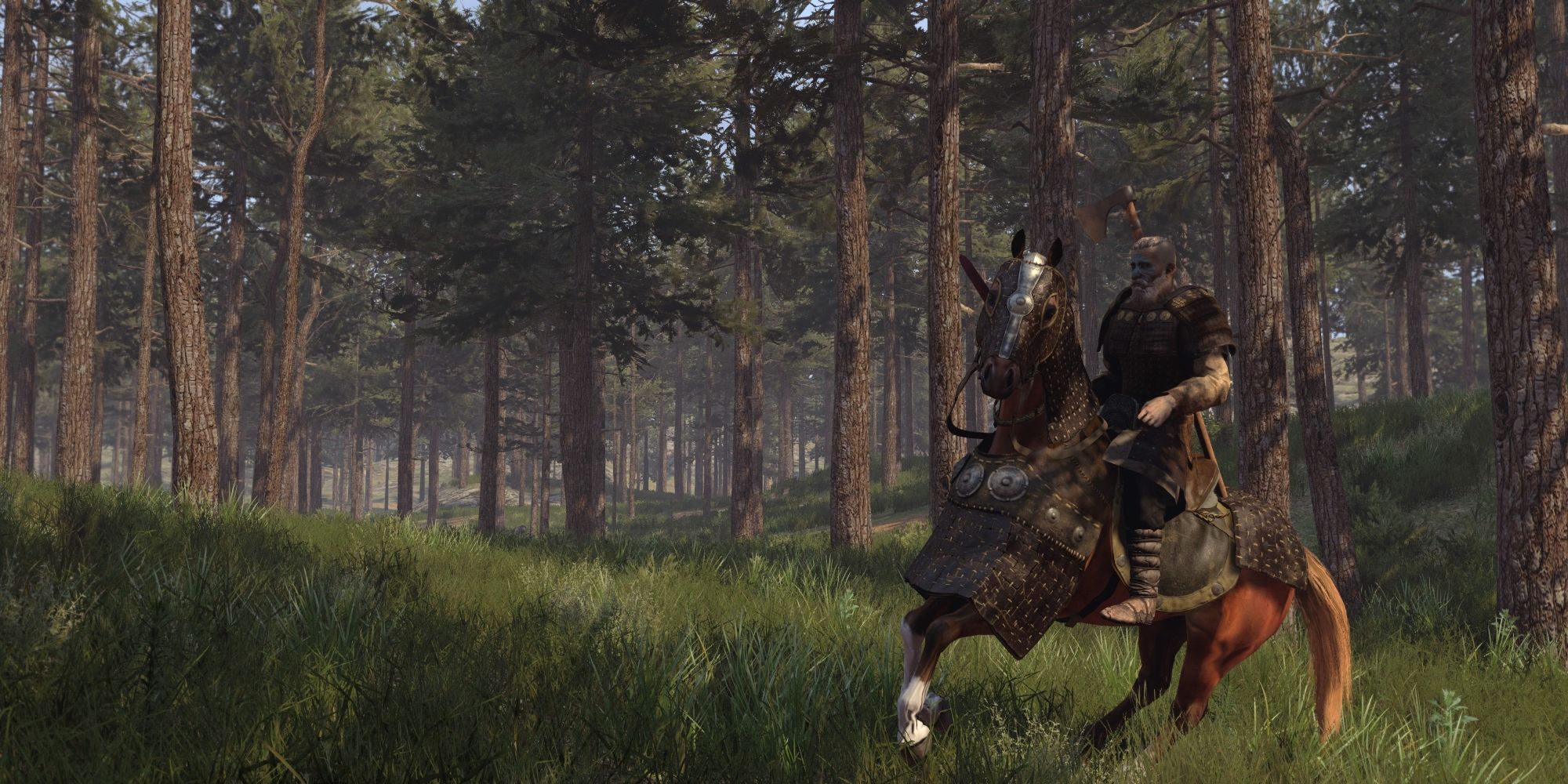 Early on in my Bannerlord career, I was captured by bandits (embarrassing, I know). They killed the half-dozen or so starry-eyed young men I had recruited from a nearby village, stole all my money, and even once I had escaped their clutches, I was left utterly helpless. A humbling experience to be sure, the memory of which brought a wry smile to my lips as I sat atop my throne, lord of all that I surveyed, 20 or so hours later.

Mount & Blade II: Bannerlord is the latest open-world strategy RPG by TaleWorlds Entertainment. Previous games in the series, Warband in particular, are rightly regarded as classics, and so Bannerlord has big shoes to fill. I’ve been playing since the early access release, and have seen Bannerlord evolve into a truly special game in that time.

You can divide Bannerlord (roughly) into two distinct parts. On the macro level, it’s a game about establishing and maintaining your kingdom, and on the micro level it’s a game about conducting large-scale battles in self-contained combat scenarios. There are certainly other games out there that do each particular thing better than Bannerlord, but it’s the way that Bannerlord’s different pieces interact that gives it the edge.

You begin the game as a nobody, and after creating a custom protagonist, you are let loose on the kingdom of Calradia. You and your party move around on an enormous overworld map, taking on quests, keeping your supplies topped up, and managing your equipment. There is a tutorial, and a questline you can follow, but honestly, that isn’t the way the game is meant to be played.

The “story” quests are suffocatingly boring (one of the early ones involves getting a history lesson piecemeal from ten different lords, who could be anywhere on the map) and it’s a lot more fun to carve out your own path in sandbox mode. Found your own kingdom and unite all of Calradia, join up with one of the eight warring factions and lead them to glory, or just murder and pillage to your heart’s content, it’s up to you.

Unfortunately, whatever you do won’t change the fact that the start of the game is something of a slog. You will always start out by rounding up men from the local villages, grinding bandits for XP and loot, and doing odd jobs like escorting merchant caravans and scaring off poachers. It does make you appreciate the more exciting stuff that comes later, but there’s no getting around those slow-burning opening hours.

Once you’ve made a name for yourself, and got a sizable fighting force together, things get exponentially more interesting. Relationship and influence mechanics start to really kick in for one thing; almost every NPC, from farmers to city artisans, to noblemen and kings, gains an opinion of you, which determines what actions you can take toward them. If you raid a village, its people will become hostile, and you will no longer be able to recruit troops from it. Conversely, raise your relationship with a particular lord, and you might be able to get them to abandon their current kingdom and join yours.

The relationship system is fairly simple, but it adds a level of depth and believability to the world. It reminds me of the nemesis system from Shadow of Mordor, in a good way. Lords I clashed with on the battlefield multiple times became my fierce rivals, and if you play a little politics and boost your charm stats, you might be able to convince your fellow nobles to grant you fiefs (towns and villages) or even pass kingdom-wide policies in your favour, such introducing a senate, which boosts your influence if your clan is big enough.

There’s plenty of depth to the RPG mechanics too. There’s a wide variety of skills and lots of interesting choices to make. Some, like scouting, make traversing the overworld easier, by increasing your movement speed and lowering food consumption, while others are combat-focused, allowing you to deal more damage and wield better weapons. Poring over the skills screen and optimizing your build is a lot of fun, there’s plenty to adjust, and you can really hone in on a playstyle that suits you. It’s exactly what you want from an RPG.

That’s only one-half of the game though. While all that’s going on, you will also have to take part in large-scale, real-time battles. Encounter an enemy party on the world map, and you and the opposing force enter an instance where the battle is fought. The essentials of combat are simple but elegant. You fight with a large variety of era-appropriate weaponry, and combat revolves around directional blocking and attacking. If an enemy raises his axe over his head, you have to manually block up in order to deflect the blow.

The weapons on offer are nicely varied. You can wade in with a terrifying two-handed executioner’s battleaxe if you so desire, or operate with a little more finesse and use something smaller like a dagger. Each class of weapon has an associated stat to pour points into, unlocking all manner of new perks along the way. Building yourself up into a hulking juggernaut and meeting the enemy head-on is just as much fun as playing as a marksman, biding your time, and then knocking an enemy lord off his horse with a well-placed arrow.

Initially, the battles suffer from the same issue as the rest of the game. Early on, all you fight are mobs of looters and bandits, who will only ever charge you en-masse and don’t present a real threat unless you are heavily outnumbered. There really isn’t any strategy required to defeat them. The late-game battles however are a huge step-up. Knowing how to use different units is essential, and to the game’s credit, every unit type has a role to play and feels well-balanced. Archers can be devastating if your troops are caught in the open, but a cavalry charge will tear straight through them. On the other hand, some well-positioned spearmen can stop a mounted assault in its tracks.

Strategic thinking is rewarded. Advancing on an enemy fortification? Make sure your men are in loose formation, making it harder for enemy archers to pick them off. Does the enemy have heavy cavalry? Place your spears in front, and if you can, get your infantry on top of a hill, which will make a cavalry charge less effective. Things get hectic, but making decisions on the fly, and watching as the battle pans out, can be breathtaking. Rallying your men for one last attempt to break the enemy line, or watching from your perspective as a combatant on the gorund as the enemy walk straight into your carefully laid trap are experiences that only Bannerlord can offer.

AI can leave a little to be desired when things get truly chaotic, but for the most part, it does a good job. AI armies will employ actual tactics, such as using wooded areas to mask an approach, or trying to split your party up by drawing you out with mounted archers. They only occasionally act irrationally or in ways that run counter to their interests, such as when small groups of peasants armed with sticks, who you’re trying to protect, run off ahead of your elite, heavily armed veteran warriors.

The sound of battle is almost symphonic. The thunder of horses’ hooves, the clash of steel on steel, and the roar as your men charge the enemy are all pitch-perfect and create this wonderful atmosphere of chaos all around you. Siege battles in particular are truly a sight to behold. The constant whizz of arrows, the thundering of the battering ram against the gate, it’s enough to send a shiver down your spine.

Post-combat, the intersection between the game’s two halves comes to the fore again. That huge, visually spectacular melee you just witnessed wasn’t a scripted story beat or a canned action sequence, it happened for a reason, and has real consequences. Maybe you captured a castle of such strategic importance that it changes the whole course of the war, or maybe you successfully repelled an invading force, but your heavy losses leave you open to attack on an entirely different front. The way Bannerlord moves seamlessly from micro to macro is genuinely impressive.

There are also a few multiplayer modes that make the most of the game’s combat engine. These range from large-scale siege battles, to smaller, more intense skirmishes. Kills on the field earn you gold, which you can use to spawn with more powerful weapons and gear. It’s a refreshingly simple approach, and the mechanics are well-suited to PvP engagements. If you enjoy games like Chivalry, Mordhau, or For Honor, then you’ll like this.

Finally, a word on the technical stuff. The overall graphical fidelity is a huge improvement on Warband, but animations are a little stiff, the UI feels amateurish (especially the charisma checks), and the overworld is lacking in detail. Despite that, the textures and lighting are (mostly) strong, and the number of soldiers on the battlefield at any one time is impressively high. It’s not cutting-edge, but it gets the job done.

Grind and jank aside, there is nothing else like a Mount and Blade game, and Bannerlord is undisputably the best one yet. Its uniqueness alone makes it worth playing. To talk about it that way is to do it a disservice though; the true marvel of Bannerlord is that it actually delivers on what is an astonishingly ambitious concept. The two halves of the game complement each other perfectly. It may be on a slow boil, but once it gets up a head of steam, you won’t be able to put it down.

Next: Mount & Blade II: Bannerlord 10 Tips And Tricks For Beginners

Deeptech startup Chara raises $4.75M in pre-Series A funding round