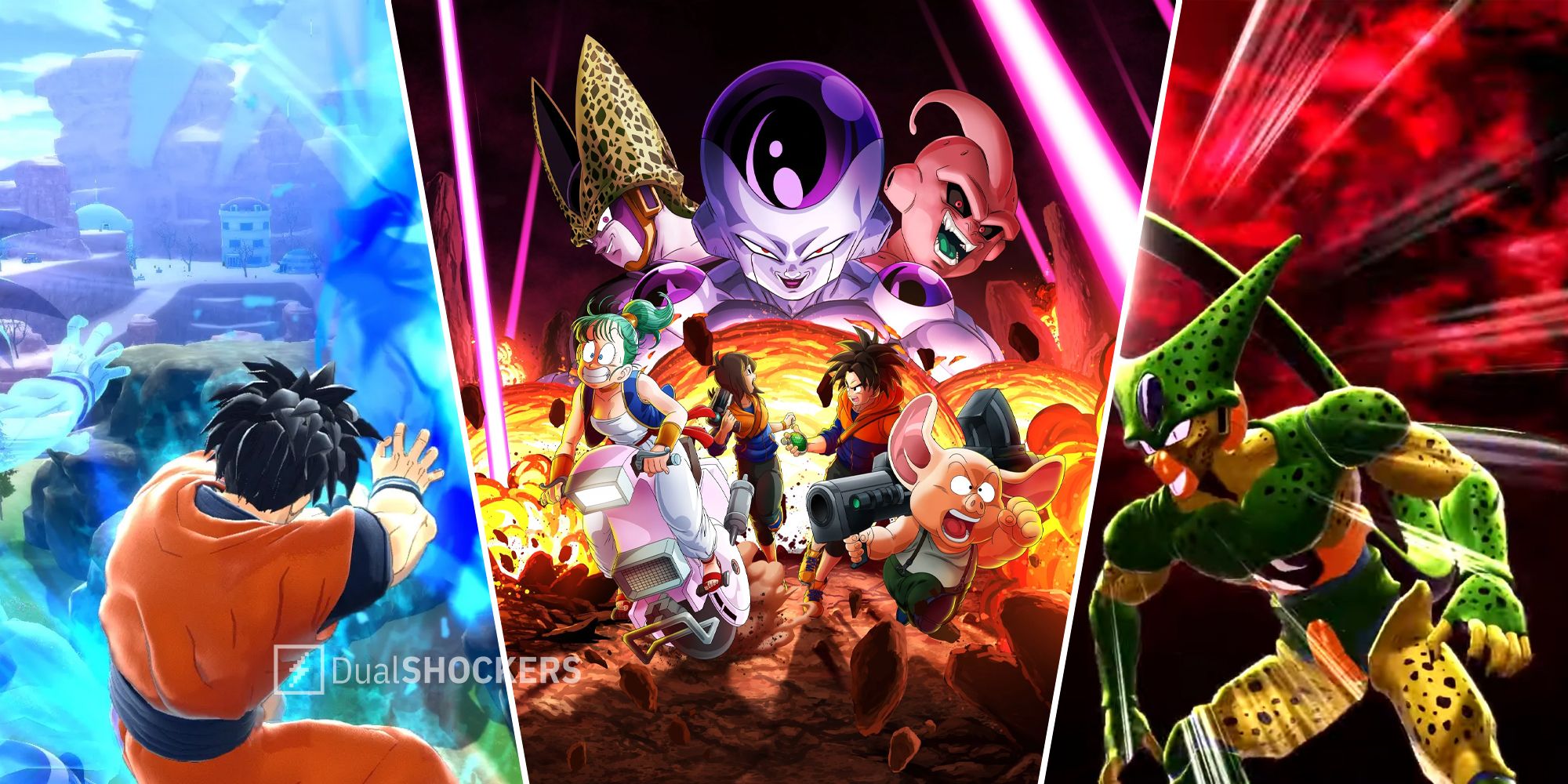 Within the first few minutes of the prologue in Dragon Ball: The Breakers, it was clear that there would be a few unanswered questions. For instance, when Trunks, my guide, asked me what I was doing here, I had no response. How should I know? What’s more, when I found out from Trunks that I, a civilian, had gotten sucked into a kind of dark portal and was stuck in “a Temporal Seam where time and space are in disarray”, he didn’t go into much detail about what in the hell that even meant.

But then again, maybe the inexplicable Back-To-The-Future-ness was actually necessary to pull off what no Dragon Ball fan thought could be done: a 7-v-1 asymmetrical multiplayer “horror” game (horror in the loosest sense of the word). However, unlike similar games like Dead By Daylight and Propnight where it’s clearly understood why the killer kills and why the survivors must survive, The Breakers only works by liberally using the concepts of time and space to justify such a wild premise. Thankfully, I wasn’t too invested in the lore to lose any sleep over the finer points of Dragon Ball and time travel.

While it is nonsensical, the premise isn’t complicated: you’re stuck in a Temporal Seam, a type of “time limbo”, and as one of seven survivors, you need to find power keys to unlock access to a time machine that will transport you out of whatever universe you wound up in and get away from the Raider – your solitary player-controlled enemy.

Ironically (or maybe not so much), the greatest ambition of the game is not to be one of the “good guys”, but to play as one of the three Raiders: Cell, Buu, or Frieza. However, this is an exercise in the randomness of the universe. As eight players can participate in a match at one time, seven will take the roles of Survivors, while one lucky player gets to mow the rest of them down in a fiery death as a Raider. For each match that a player isn’t a Raider, they receive points that inch them closer to actually getting a chance to be a Raider later on, but this chance is never guaranteed and can take a long, long time. Truth be told, I never got the opportunity, and am actually still pretty bitter about not being able to take out a slew of those hip smug Survivors with their cool time-traveling gadgets.

At the start of the game (and after adorning my avatar with war-painted cheeks and blue hair), Trunks taught me the rudimentary movements, which were astonishingly simple: move, jump, dodge and shoot – with an actual gun. A gun! Was this really a Dragon Ball Z game? Where were the gravity-defying epic fights peppered with fierce monologues and light shows? It might as well have been a less-anarchic Grand Theft Auto, which actually suited me fine.

The gun felt familiar and kept me grounded. It also helped to completely blast apart random objects in caves while snooping for power-ups. In fact, due to the quick pace of the game, there were many times that I failed to find anything useful and would foolishly attempt to defeat Cell with my lone trusty pistol. Apart from embarrassing, it’s a guaranteed way to leave the game early.

The online components are currently the game’s biggest drawback. For one, the regional capabilities surrounding the matchmaking seem to be flawed, with my teammate in Florida and me in Poland having to wait over 10 minutes to find fellow players.

But my biggest contention was communication. I never had any verbal contact with my fellow Survivors as we scoured the map for keys. My team always seemed to be composed of top-tier players, which made me wonder what I was even doing in their squad. There were times I wanted to reach out and make them aware of this sentiment, but the outlet didn’t exist.

Despite issues with communication, the minor details tucked into the interior of the game were enjoyable, especially when I could either temporarily shed my frail mortal frame for a few seconds, or summon an actual dragon. The Temporal Seam realm, where all the action takes place, houses orbs that contain the “souls of powerful superheroes who once lived in this world,” such as Goku and Piccolo, which you can select as your preferred “Dragon Change” avatar at the start of the game. As Goku was the most recognizable transphere (and with the coolest hair), he was my guy. I’d already have some practice during the training simulator, most of which involved me flying around firing yellow balls of energy at no one, so how hard could it be command this powerful warrior on the battlefield?

First, in order to even transform into Goku, you first need to fill up your transphere bar with enough transphere power-ups (it takes about 5 or 6) that are spread out across the maps. I found that saving defenseless humans cowering in caves earned you about three or four power-ups, which saved me some time. Finally, I had accrued enough power-ups and Goku’s form pulsed in the bottom right-hand corner of screen, itching for battle. What I didn’t take into account was that you only have Goku’s abilities for a limited time – even less if you use too much firepower. But whatever, I was finally as formidable as the Raider with a chance to prove myself to the team.

Area D was still in flames from the Raider’s handiwork, which meant he was momentarily distracted. Now was my chance! I shot up from the Earth to meet him midair and unleashed a barrage of yellow-energy balls. In no time, I found that Buu was much stronger than the previous Raider, Cell, and could somehow see through my tough-guy act. He hit back with a punch that immobilized me in a crackling pink ring, slamming me down to the cold hard ground below. Goku was gone, and it looked like I was too, until my teammate scurried out and revived me without exchanging any pleasantries. I breathed the air of life again, and hustled to a cave in search of something even more coveted than the transphere power-ups: actual dragon balls.

It stands to reason that when you play a game called Dragon Ball, you were bound to see actual ball-like objects affiliated with dragons sooner or later. If a Survivor manages to collect not just one of the legendary balls, but all seven and place them on a stone altar, they have the power to summon a powerful dragon wish-granting dragon named Shenron.

However, due to the quick pace of the game – i.e. how fast the Raider can kill you – that’s easier said than done. The dragon balls are scattered throughout the map, which means that it would take an extremely exceptional player to score them all without dying. But in actuality, you’d never have to go to such lengths. Teammates work together to pool their dragon balls for the good of the team, but only one can summon Shenron. Once you perform the summoning ritual, Shenron’s beastly figure soars through the sky and will present two options that will affect the game in your favor. You can go for either the more egocentric “Give Me More Power” wish, or the more benevolent “Grant My Allies Power” choice but here’s the thing: Raiders can also find dragon balls and summon Shenron, with similar options.

The Breakers is an experience that necessitates multiple attempts not only to boost your character’s level, but also to figure out the controls, memorize the map and the best way to manage your time. Once you reach a certain level of expertise, I can see it becoming more fun than simply running around shooting a pistol at boxes and hoping not to die within the first 5 minutes, but this is a symptom of inexperience and can easily be remedied with a significant amount of hours spent with the material.

Dragon Ball: The Breakers needs to work on its online infrastructure, but beyond that it’s a fast, exciting romp best played with a party full of well-known friends, as opposed to silent strangers.

NEXT: Red Candle Games Talks ‘Taopunk’ And Moving On From Horror Games The Art of Remember Me